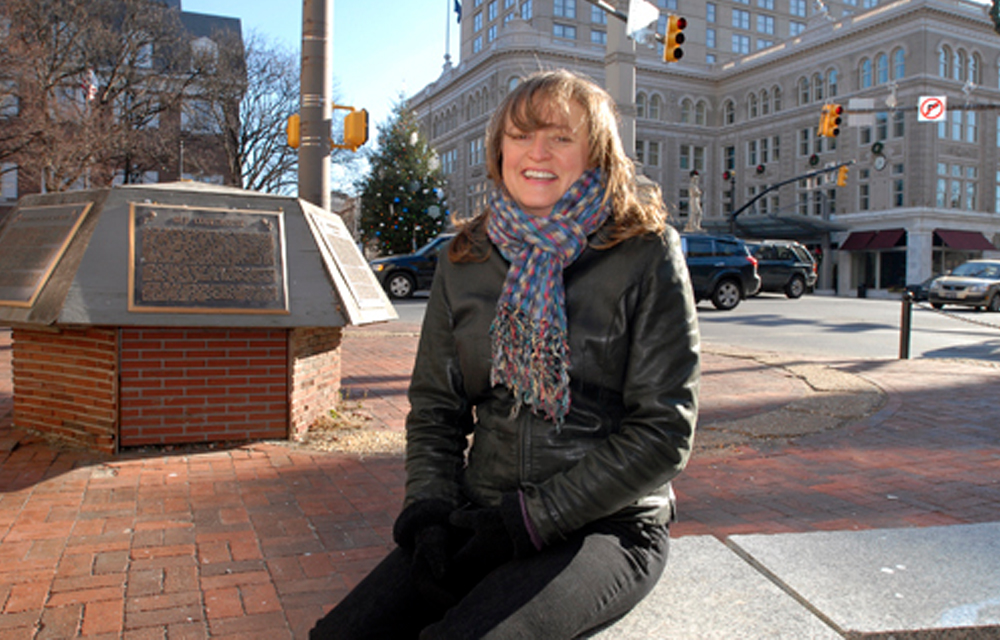 Barbara Buckman-Strasko has been a staple of the Lancaster literary scene for years. She first came to the area to attend Millersville University in the early 1970’s and eventually moved into the city and became involved in social programs dealing with poverty and education.   She would go on to spend her career working for the School District of Lancaster as a parent educator, literacy coach, and counselor, but writing and teaching poetry all the while.  Her chapbook On the Edge of A Delicate Day was published in 2007 and her first full length book, Graffiti in Braille, was published in 2012. She served as Lancaster County’s first Poet Laureate from 2008-2010, has an MFA from Vermont College of Fine Arts, was Teacher of the Year in 2009 for River of Words, and currently serves as Poet in the Schools for Lancaster Poetry Paths. Her poem “Bricks and Mortar” will appear as a permanent installation in downtown Lancaster’s Penn Square later this year.

Barbara lives in a quiet, old-school suburb along the Conestoga River where, thankfully, there is no vinyl siding anywhere to be seen. I arrived late, having driven past her house several times before seeing the number. She welcomed me in through the kitchen, presented me a cup of tea, and led me into a sitting room at the rear of the house where a fireplace was burning. Out through the sliding doors and across the lawn, the river flowed cold and gray, gleaming in some places from the sun. I sat in a marvelous rocking chair that she later informed me had been her grandfather’s.

After a few minutes of small talk, easing our way into conversation, I finally remembered to turn on the tape recorder. She was telling me, “The thing Sting said, that I just love is–” When she saw me turn on the recorder, she said, “Oh god, don’t tape me.” She laughed, shrugged and continued, “So anyway, the thing Sting said was this: ‘All my life I have tried to find the truth and make it beautiful.’ I just love that. Doesn’t that say it? That’s poetry.” And so our interview had officially begun.

When Barbara came across J.D. Salinger’s Franny and Zooey in high school she was struck with Seymour Glass’ fascination with Asian poetry. She found herself reading Asian poems and writing after that style. She also learned Spanish and read the works of Lorca and Neruda as a young poet and reader. In college, she was very influenced by musicians such as Joan Baez, Joni Mitchell, and Bob Dylan, and participated in the counterculture, protesting the Vietnam War alongside many of her peers.

It is easy to see that Barbara genuinely cares for language and believes in its power. She told me that she expresses this when she teaches young writers: “That is what I always tell the kids. Just think how powerful this is. You have a pen and a paper, and your words can change you and can change other people.” More specifically, we discussed the power of words to situate and to help us relate to the natural world and to other people.

Furthermore, she told me, “That’s another thing I tell my students: you have to know the names of things. It is just so important. Flowers. Knowing the name of the river that goes past your house. I think my father was so interested in that; he was that kind of person. You’ve got to know the history of things, the names of things. Even though he was a vacuum salesman.” (Later, she told me the story of her father having to drop out of Temple University Medical School during the Great Depression because he couldn’t afford the train fare in to the city. Like so many other hard working Americans during that time, her father’s story seemed infused with the unique American nobility—of choosing to keep going, working, improving. It became obvious to me that Barbara remembers her father as not just a salesman, but a man deeply, uniquely engaged with the world.)

In her work, Barbara often engages with images of nature and subtly works in commentary on socio-historical subject matter from politics, to urban living, to war, or poverty. But she insists that poetry remains an aesthetic endeavor: “I’m not the type of poet to just come out and say something. I think a poem has got to be a piece of art, a thing that is intriguing, that implies things. There just has to be some kind of mystery involved.” This potential for subtle implication through imagery is a precise and apt way to describe her body of work.

Barbara insists that one of the deepest influences on her poetry is her sister, a visual artist with whom she is close. From an early age she remembers her sister pointing out beauty and instructing her to see the world from an unique and artistic point of view: “She saw the world differently than most people and began to paint her vision very early in life. Now as an art teacher she tells me that creating art is not about how skilled you are in drawing or painting, it’s about how you see. I think it is the same for the poet.” Further influences on her work include the poets Carolyn Forché, Yusef Komunyakaa, Robert Hass, and the local painter David Brumbach, who was a close friend. During a portion of our interview, we spent time flipping through a book on Brumbach’s life and work, until we got to a page with a beautiful painting, and Barbara said to me, “Oh, I have this one. It’s right behind you.” There it was on her living room wall. (Check out more on Brumbach’s work here.)

Perhaps the integrity of her work and her teaching can be summed up by Barbara’s willingness to lean into the unknown, what Keats described as “negative capability.” This idea came up many times throughout our conversation, emerging almost as a central purpose for her life and work: “You have to be willing to be uncomfortable. So many people are unwilling to feel that discomfort of not knowing what they’re doing or not knowing what they are thinking. But I think it’s just very important. We’ve just got to face that disequilibrium.”

To learn more about Barbara’s work, check out her website or get a copy of her most recent book here.

Barbara Buckman Straskopoet laureatepoetry
Previous ArticleTeenage Poets Compete to Raise Money
Next ArticleThe Triangle's 4 Spring Things You Can't Miss
Eliot White
Eliot White is currently completing a Master’s Degree in American Literature at Millersville University. Before grad school, he taught high school English and social studies. A writer of both poetry and fiction, has worked on the staff of Third Point Press, an independent online literary journal, and is the host of The Turning Wheel, a monthly reading series showcasing local and regional writers at DogStar Books. To pay the bills, he works as a writer and communication strategist for The Infantree.

Queerness, Violence, and Poetry: A Conversation with Meg Day

Review of Michael Washienko’s “So Spicy, So Sweet”