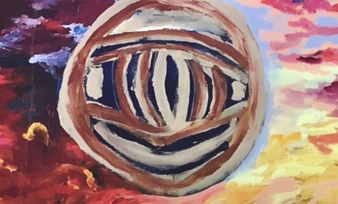 Stories that Make the Invisible, Visible

These are the names of people we talk to everyday, people who pass us in the halls and on the street.  People who have college degrees and people who are hoping they someday will. These are the names of mothers who love their children, of sons who miss their mothers, of brothers who do not know when they will see their sisters again. These names belong to a handful of the refugees and immigrants living in Lancaster county, and these names have stories to share with you.

After years of working with refugees and immigrants at Church World Service through their Immigration Legal Services Program, Audrey Lopez and Carrie Carranza, co-founders of Invisible Americans, decided they needed to do more to further the narratives of the people with whom they worked and knew personally. In the midst of a tense political climate, anyone labeled as “other” is often publicly paraded as a scapegoat for problems not easily explained away. In our most recent election year, this proved to be true and necessitated a way to change the conversation that surrounded an already vulnerable population. Audrey and Carrie decided on one of the most powerful and effective tools to accomplish that—story.

“In 2003 I went back to Sudan to visit my mother’s grave and the town was unrecognizable. People were suffering, and there were no buildings; what affected me most was that there were no schools. A friend and I decided to do something, so we recruited others and sought government approval to build a school. One of these recruits became my husband. In 2013 the school opened and was called “Aninyaki” — “Let us be strong.” Being in the United States I try not to forget where I come from. When I was little I used to walk 9 miles to school and back. After getting home, my feet hurt so much. I used to tell myself that in the future, I would build a school so that other kids wouldn’t have to endure what I had endured. I am happy to know that I can continue helping children get an education back home.” (Photograph by Melissa Engle Hess Photography.)

The aim of the Invisible Americans project is to make “immigrants visible in a new light through their own words.” As lovers of language and story, we as a literary community understand that our carefully chosen words shape and drive the narrative set forth. Words have the ability to both build walls and tear them down, to inform or confuse. They can cause fear or point us towards hope.

These days, for better or for worse, the easiest and most effective way to share a story with a large audience is the internet. In a recent conversation with Audrey, she admitted that, “initially it was just supposed to be a social media project.”  After meeting a few times with local DREAMers** , the group began crafting and refining the personal stories they wanted the world to know, and in July of 2016, the first Invisible Americans post went up on Facebook, and the social media campaign was launched. Originally, Invisible Americans was only to include undocumented youth, but the movement soon grew to include refugees and other immigrants as talk of walls and immigration bans became more prominent in news cycles. Soon, Audrey and Carrie decided that it would be amazing to include all of these pictures and stories in a book, but Audrey admitted to having no idea how to do that. “The way we always pitched it to the DREAMers was like, ‘We want to make a storybook,’” Audrey explained. And that’s exactly what the project morphed into, with the help of a grant from the Unitarian Universalist Church in Lancaster.

Invisible Americans, published in November of 2016, is an inspiring “Humans of New York” styled collection of portraits paired with the personal stories of Lancaster’s refugee and immigrant populations. Hardcover bound with a painting by artist and DACA** beneficiary, Jonathan Almanza, on the front and back of the book. There are 100 brightly colored pages full of hopeful smiles, able hands, and questioning eyes that allow us a privileged glimpse into a world many of us would admit we are unfamiliar with: another person’s heart and mind.

The triumphs, fears, concerns, and ambitions of these vibrant and diverse members of our community have been artfully assembled for the world to see. And, for a simple reason: they are here with us. They work alongside us. They suffer alongside us. They love alongside us, and they are not a number or statistic or stereotype. They are living stories; stories that breathe and laugh and weep and bleed. They are stories that need to be heard, and now they are in our hands, in front of our eyes and etched into our hearts.

While Invisible Americans is a striking artifact in both its physical text and social media forms, it’s not just an artfully bound book or a well-curated website. It’s a multifaceted, rich tapestry of different mediums—including Story Slams and Community Meetings—and approaches all focused on creating empathy through storytelling.

What is often articulated in news articles about immigration policy or legislation barely scratches the surface of, or totally miscounts, the human lives these executive actions, statistics, and stereotypes affect. That being said, one of the most powerful tools used in helping to defeat misconceptions and malicious stereotypes is narrative. It can come in the form of pictures and paragraphs, bound between a front and back cover. It can be shared and “liked” in the social media sphere. It can also be discussed between two humans, sitting across from one another, in real life. The Invisible Americans project has become a broad response to the ever-increasing and misplaced fear surrounding the issue of immigration that permeates our culture.

Its existence within accepted forms of storytelling, such as books or blog posts, Invisible Americans has carved out a space for members of the larger community who are curious, cautious, or unsure about real human lives our broken immigration policies impact. This past January, I attended the most recent meeting of DREAMers in Lancaster county during which organizers invited the larger community to come, learn, and interact with its members.

On January 10th, in partnership with Church World Service, this marginalized and endangered population opened its arms to those who had questions. Over 100 people had the opportunity to ask their questions, and the DREAMers got to tell their stories in person. In spite of the very real fear of deportation due to the new administration’s promise to repeal DACA, I found myself listening to stories of hope and strength and forgiveness.

In response to a community member asking Claudia, an undocumented immigrant and DACA recipient from Honduras, “Do you ever wish you and your mother would have stayed in Honduras?”

After discussing the fear she experienced after the election, Shirley, an undocumented youth and DACA recipient from Argentina, explained that in spite of that fear, “I’m not going to let a [political] party define my relationships.”

At the end of the meeting, it seemed quite clear that the response of community members, who stood around in small groups talking with the DREAMers, was a response of awe at the stories of resilience, hope, and forgiveness. A response of shared humanity.

“I am a high school student at JP McCaskey, and I am an undocumented teen. Growing up I never thought a lot about being an immigrant. I thought I was living a normal life. Once I was told I was undocumented, my life took a turn. It felt like being in the closet again, hiding who I was. It hurt the most when my grandmother died from cancer, and I never got to see her. Everyday I would lie on the phone whenever she asked, “When will you visit?” and all I could say was, “Soon.” Everyday I think about my future and whether I will reach my dreams, but I still hold my head high, filled with hope.” (Photograph by Melissa Engle Hess Photography.)

Invisible Americans exists — as an organization, as printed text, as a blog — to highlight and celebrate the possibility of shared experience and human intimacy. Through conversation, spoken word, and written text, these stories have encapsulated the experiences of those who came to this country either as a refugee, immigrant, or a small child crossing the border with their parents, in their efforts to underline the similarities to the dreams and hopes of average Americans.

Despite what many politicians and news outlets would have us believe, we humans are not so very different from each other.

We make our way through the world by stringing stories together. We build walls and tear them down with tools made of nouns paired with verbs next to adjectives. We plant slow growing seeds of understanding with narrative, poetry, and song. By recounting our experience at the grocery store last night; by sharing the memories of our childhood triumphs and adulthood setbacks; by passing along a joke that we heard some guy at the bar tell us a few weeks ago; by whispering or yelling the fears we feel we must overcome in the days ahead.

Story is how we move forward together.

DACAdreamersimmigrant storiesInvisible Americansrefugee stories
Previous ArticleThe Writing Meet Up You've Been Looking For
Next ArticleLong Read: Writing and Making 'An Economy of Debris'
Sam Sweigert
Sam Sweigert is a lover of lit and is lucky enough to call many a storyteller friend. She holds a Bachelor’s Degree in English Education, and she is passionate about working in ways to promote community building through story, voice, and poetry. She has had work published in Third Point Press and is currently the blog writer/curator for Lancaster Transplant, a local organization focused on placemaking for new people in a new place. When she’s not thinking about how cool the moon is, she’s trying to figure out how to navigate homeownership and will let you know when she has acquired a dog in her life because writers need pets.