Meghan Kenny on Writing, Teaching, and Her New Book ‘Love Is No Small Thing’

Meghan Kenny writes about matters of the heart: in her first collection of short stories, Love is No Small Thing, published earlier this month by Yellow Shoe Fiction, she explores the nature of love and loss. Her novel The Driest Season is in the copyediting phase at W.W. Norton, she says, and will most likely be out next January.

After a childhood in New England, an undergrad education at Kenyon College, an MFA at Boise State University, and time spent in such far-flung places as Japan and Peru, Kenny finds herself in Lancaster city in her third year of teaching mainly seventh-grade English at Lancaster Country Day School. We caught up with her last week at Characters Pub.

The Triangle: How does a story begin? What comes first—concept, setting, characters?

Meghan Kenny: I need to have something concrete. So I usually have a character voice or a specific problem, and I start there. I think I’m more drawn to writing scene and dialogue than I am to exposition.

Eudora Welty said to write about what you don’t know about what you know. So with a lot of my stories, I know about being a daughter or a sister or a partner to someone or a friend, but within these dynamics, there is a lot that I don’t know. The mysterious and unknown, people’s motivations and how we navigate relationships—why people leave, why people lie.

T: What are some of your favorite writing exercises to give students?

MK: I like to try to get them outside of their own experience. Recently I gave my seniors a character prompt. Before you write anything, you make a list of character traits: fears, desires, defining physical characteristics. Then you start by having the character introduce themselves. I use this exercise to teach them the elements of fiction. After they create the character, students write about them having a flashback, have them interact with another character, etc.

An exercise that I love that was given to me, (which resulted in) the story of the lovely boys with the cross-dresser–the teacher gave us two pictures from magazines and a first line. We had to make a list of tragic events and mundane activities. The tragic event would shape the story. You’d make a story from these elements. I love giving that one to the kids because you can be this white kid living in Lancaster, and never have traveled much or anything, and with this exercise they end up with characters much different from themselves, and how do you make it work?

And what I teach them in that prompt, I hope, is that there’s a craft to writing—character, conflict, place, what’s happening, why it’s happening—that it’s not just the muse, or whatever.

T: You often write from the male point of view. Why do you choose to do this and what are the challenges of writing from a male perspective?

MK: It’s probably a little weird to say this but I don’t find it very challenging. I guess I’m making a judgment here, but I’m a pretty crass person and it feels more accurate to write like that from a male perspective. Also, the female perspective feels a little too close to home sometimes—like the story about the couple trying to get pregnant.

T: Several of your stories include these kind of mystifying confrontations between men.

MK: Part of the reason I think I like to write from a male point of view is because men perplex the shit out of me—to better understand them. And I don’t know if it works, but I like that idea.

T: Many of your characters seem lost, like they just kind of ended up where they are.

MK: I feel like the stories are about a lot of near misses: the characters’ lives didn’t turn out the way they thought they would—now where do I go from here?

I feel like I find myself in places where I never expected to be—like, how did I get here? But you’re always making choices along the way. And just because you have a goal doesn’t mean you’re going to get there. With seventh graders, they’re learning they’re not gonna get everything they want, but it’s going to be okay. I think those things just get bigger and more profound as you get older.

MK: Yes. It’s a really quiet story. It takes place in World War II-era rural Wisconsin. We never knew for sure what happened, so I made it up—it’s 98 percent fiction. We weren’t sure about her childhood. She had dementia. Before she died, we took (my grandmother) and her sister back to the place where they grew up. The crazy thing was, it was exactly as I had imagined it. But I never knew for sure (about the hanging) before we did the research.

T: Did you find a newspaper clipping or something?

MK: Yes. There’s this tiny little library—I wanted to look at microfiche. I found it. It was printed in the newspaper. It would probably have been on a Sunday, and they would have found him when they got back from church: he hanged himself by a short rope in the barn. It happened during the Depression, actually, but I chose to place it during the war. (In the novel) she finds him on a summer day and then in the couple of months afterward, things tilt and shift. 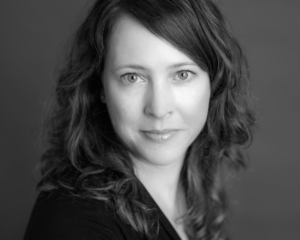 ABOUT THE AUTHOR: Meghan Kenny was raised in Connecticut and New Hampshire. She received her BA in English and creative writing from Kenyon College, and her MFA in fiction from Boise State University. She is the winner of the Iowa Review Fiction Award, has published work in The Kenyon Review, The Cincinnati Review, The Gettysburg Review, Hobart, Pleiades, and elsewhere. Her debut novel, The Driest Season, is forthcoming from W.W. Norton in 2018.

FictionLove Is No Small ThingLSU PressMeghan Kennyshort stories
Previous ArticleThe Strange Suburban Underbelly of Eric Puchner's 'Last Day on Earth'
Next ArticleYour Name, in a Book: The Lancaster Public Library's Upcoming Adopt-a-Book Event
Julia Scheib
Julia Scheib is a student, senior-home-care worker, and sometime journalist living in Lancaster, PA. She received her B.A. in art from Millersville University of Pennsylvania, where she also studied writing and picked up a love for sociology. Her favorite writers are Zadie Smith, Tom Wolfe, and Robert Hass. She is currently pursuing a career in occupational therapy. In her spare time, she enjoys reading, writing, drawing and wandering around in the woods.

Poetry First Fridays at the Ragged Edge in Gettysburg

The Poet as Activist: A Conversation with Carla Christopher