Review: ‘Not Without Our Laughter’ by the Black Ladies Brunch Collective

The Black Ladies Brunch Collective (BLBC), a group of six audacious, bombastic and feverishly authentic black women, has produced a genuine masterpiece with Not Without Our Laughter (NWOL), published in 2016 by Mason Jar Press in Baltimore, Maryland. The BLBC “hails from Africa, Ireland, Guyana, Native America, Jamaica, Denmark, Baltimore, Virginia, Silver Springs, DC, and many other locales,” in the words of celeste doaks (she insists upon not capitalizing her name), one of the six BLBC members, the editor of NWOL and author of its “Editor’s Note.” In that note, doaks quotes a line from a poem written by Staceyann Chin—“we come in too many flavors for one fucking spoon”—to express the diversity of culture, ethnicity, and sexuality represented in the six women.

Shameless introspections, outward analysis, as well as gaudy, unfiltered perspectives explode from the pages of NWOL. The poetry is relentless. Its verses keen as a blade unsheathed. Having arrived shortly after the 2016 presidential election, you had better believe there are cutting and saddening references to it in the poems. One poem in particular makes this reality quite laughably obvious. “Steps to Healing,” by Saidi Agostini, comes in the form of a numbered list of a hypothetical therapy exercise. About a third the way through appears a tongue-in-cheek reference to the “positives of the Trump administration” and Pence’s hair being “on fleek.” (There really are some gems in this anthology.) The poem, however, concludes with a dire statement of anguish: “read of the 8 trans people who have committed suicide since the elections.”

The anthology is not all that dark. It is at its core an attempt to humanize an entire demographic of people whom have been disenfranchised in countless respects, and for whom social acceptance is a struggle. (It should also be mentioned that NWOL is an homage to Langston Hughes’ debut novel, Not Without Laughter (1930), a semi-autobiographical account of life for black folks in Lawrence, Kansas during the Jim Crow Era.) In the poem “13 Reasons Why I Love Long John Bottoms,” doaks attempts to present a voice (quite patently her’s) as facsimile of what would otherwise be seen as her opposite—a middle class white woman obsessed with her body. We all have this picture in our heads of skinny barbies constantly looking in mirrors. But here is a black woman talking unabashedly about her undergarments. 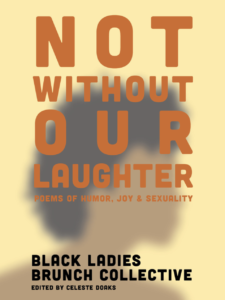 It occured to me while analysing this poem that there was a motif throughout the poems at large alluding to the aforementioned classism. There is an overt effort by the authors to place black women (themselves) on the same plane as any other social group. To my mind, that unspoken group is white women, for whom positive body image and prettiness are often default luxuries. This insistence sometimes seems to detract from the more sincere racial and social commentary. The classist tropes seem to be pointed and intentional, though a bit, I thought, detached from the narrative of struggle specific to people of color and LGBTQ individual—which is otherwise the focus of the anthology and, according to its foreword, its modus operandi. Nevertheless, one can see as an informed reader, how class, sex and race are all ultimately entangled.

It might become difficult to mediate the multitudes of viewpoints and experiences in this anthology. After all, it is a collection of poems written by six different women. Despite this, its editor performed her duties quite well. The book is organized into seven self-contained sections, each one an avant garde meditation on a particular idea. For example, the second section is titled, “Our Misbehavior?,” in which there is a poem titled, “Harriet Tubman is a Lesbian,” by Saida Agostini. The poem plays with the idea that Tubman and Sojourner Truth were lovers, and is presented in a refreshing real black vernacular. And the poem after that, “Knowledge of The Brown Body,” by Teri Ellen Cross Davis, refers to the theoretical lesbian love affair with this beautifully carnal line: “…my fingers deep inside the agent that helped break / the back of the confederacy.” (I wrote “wow!” in my notes.)

Not to ruin any spectacular and jaw-dropping surprises, but it wouldn’t hurt to pique a little interest. There truly are too many great poems in this anthology to run out of examples. There is a poem written in the voice of a penis, “Adventures of The Third Limb,” by Saida Agostini; a poem about a pet roach, “Sir Roderick,” by Tafisha Edwards; and a poem enchantingly reminiscent of Mary Oliver’s structure and voice, “What it Takes to Breathe,” by Saida Agostini. The poems “Ars Poetica With Fever,” by Anya Creightney and “Atomic Snowstorm,” by Tafisha Edwards are remarkable—the first for its imagery and what you learn from the second poem about its syntax; the second, for its uncanny structure and play on the first poem. There are also several beautiful poems about Prince. Because… well, he died in April of last year and he was a god. These celebratory and elegiac poems do him abundant justice.

Then there is “Manifesto of a Born Again Internal Organ,” by Katy Richey which is quite literally a poem written in the voice of a vagina. Both striking and relatable in a perfectly oxymoronic way. And, my favorite poem of the collection, the last poem, “Great Granny’s Last Night,” by Saida Agostini—it has a way of placing you there in the heat, and the images of “the great horned thing” sitting alongside god waiting for granny to pass. It is incredibly well-composed and a perfect denouement.

In short, this book is important for everyone to read, and I hope you will see, as I think I eventually did, that the seeming vulgarities and base language (paired with the class-conscious undertones) work to make the poetry relatable. As, in fact, was the effect of Hughes’ inaugural novel, Not Without Laughter. As with Hughes’ novel, NWOL grabs you, sets you firmly in the middle of such disenfranchised lives and their myriad hopes for connection and social value.

Perhaps it could be said this book aims, in a way, to open old scars of shame, guilt and culpability resulting from old socially-entrenched power structures, and by doing so create the opportunity for true healing. This anthology is a salve of salvation, an olive branch of remediation. As celeste doaks writes in her foreword, “this collection is one remedy” to our collective shame. We would do well to take hold of it.

The Black Ladies Brunch Collective consists of Said Agostini, a queer Afro-Guyanese poet and social worker, a Cave Canem Fellow, and is currently working on her first collection, uprisings in a state of joy; Anya Creightney, also a Cave Canem Fellow, is a poet, editor and coordinator, and Programs Specialist at the Poetry & Literature Center in the Library of Congress; Teri Ellen Cross Davis, also a Cave Canem Fellow, is on the advisory committee for the biennial Split This Rock Poetry Festival, and coordinates the O.B. Hardison Poetry Series for the Folger Shakespeare Library in Washington, D.C.; celeste doaks, poet and journalist, author of Cornrows and Cornfields (Wrecking Ball Press, UK) in March 2015, and teaches creative writing at Morgan State University; Tafisha Edwards, a Cave Canem Graduate Fellow, author of THE BLOODLET, winner of Phantom Books’ 2016 Breitling Chapbook Prize, is an MFA candidate at Southern Illinois University Carbondale; Katy Richey, also a Cave Canem Fellow, was a finalist for Tupelo Press Snowbound Chapbook Poetry Award, and hosts the Sunday Kind of Love reading series open mic at Busboys and Poets in Washington, D.C.. Learn More about Mason Jar Press, publisher of Not Without Our Laughter, by visiting masonjarpress.xyz.

Black Ladies Brunch CollectiveMason Jar PressNot Without Our Laughterpoetry
Previous ArticleSarah D’Stair’s Hypnotic, Experimental Novel ‘Central Valley’
Next ArticleContradictions and The Uncanny: A Review of Jessica Alexander’s 'Dear Enemy'
Richard Payne
Richard Payne was born and raised in Lancaster City. He attended McCaskey High School and Millersville University, where he graduated with a BA in English with a concentration in Print Media Studies. Richard was involved with the literary journals and newspapers of each respective school, and worked as a poetry editor at Rapportage (the publication of the Lancaster Literary Guild). Richard has also spent many years as a tutor and educator, a spoken word artist, and hopes to publish his first collection of poetry in the near future.

BUT IS IT LIT? // Popular Home Remedies and Superstitions of the Pennsylvania Germans

Patricia Lockwood at the Midtown Scholar