Carl Bakey writes about Central PA’s thriving theater community for The Triangle. While studying English and Theater at Millersville University he performed in productions of Into the Woods, Hair, 25th Annual Putnam County Spelling Bee, directed several short plays, and had his original short play Pick Up produced. He has been as a season critic for the Fulton Theater, has performed in Man of La Mancha at the Ephrata Performing Arts Center, and was the director of Guys & Dolls at Lancaster Catholic High School in 2012. His favorite playwrights are Stephen Sondheim, Neil Labute, and Rajiv Joseph. He has lived in South Africa and Hawaii, but is originally from Elizabethtown, PA.

Gillian Branstetter is a writer and reporter based in Harrisburg. She studied education at Penn State University and has work featured in The Daily Dot, The Atlantic, Everyday Feminism, Salon, and other major publications.. She is an organizer for the Almost Uptown Poetry Cartel in Harrisburg and is an active participant in the midstate’s arts and literature scene.

Caitlin Downs is an adjunct professor who triangulates between three colleges in the city of Lancaster, Pennsylvania. An alumna of Arcadia University, her poetry has appeared in such places as The University of Edinburgh Journal and The Fiction Pool. She digs eating rich foods, walking her dog in the woods, reading in solitude, kittens, and boisterously laughing in public.

Helen Kaucher is a pastry chef, prep cook, writer, collaborator, and owner of an unofficial craft business called Hels’ Bells Handmade. She boldly undergoes the task of filling her schedule with creative ventures, from compiling a zine called Tepid Mess, to baking croissants by the dozen and refinishing furniture. She can be found in the north and southeast corners of Pennsylvania roller skating, hiking, swimming, writing, and biking. Caffeine is her illegitimate sister.

Rashid Noah has a B.A. in English and is currently a graduate student at Millersville University. He enjoys fishing, traveling, and is an avid reader. In his spare time, Rashid loves to peruse used book stores and yard sales in search of rare books. He is passionate about a wide range of authors, from Shakespeare to African American writers, but he especially enjoys the writers of the Harlem Renaissance period. Originally from Freetown, Sierra Leone, Rashid currently lives in Dallastown, PA.

Richard Payne was born and raised in Lancaster City. He attended McCaskey High School and Millersville University, where he graduated with a BA in English with a concentration in Print Media Studies. Richard was involved with  the literary journals and newspapers of each respective school, and worked as a poetry editor at Rapportage (the publication of the Lancaster Literary Guild). Richard has also spent many years as a tutor and educator, a spoken word artist, and hopes to publish his first collection of poetry in the near future.

DJ Ramsay is a professional communicator and proud resident of the city of Lancaster, PA. His work is inspired by the belief that simplicity never goes out of style, and his personal work is often described as playful and thought-provoking. He appreciates (in order of importance) coffee, $1 tacos, and college-ruled notebooks. He is also a published coloring book author and a jack of all trades at his alma mater, Millersville University.

Meghan Phillips is the fiction editor for Third Point Press and an associate editor for SmokeLong Quarterly. Her writing has appeared or is forthcoming in Corium Magazine, The Journal of Compressed Creative Arts, matchbook, and WhiskeyPaper. Meghan has an MA in literature from James Madison University and works in an archives and a college library.

Julia Scheib is a 26-year-old student, senior-home-care worker, and sometime journalist living in Lancaster, PA. She received her B.A. in art from Millersville University of Pennsylvania, where she also studied writing and picked up a love for sociology. Her favorite writers are Zadie Smith, Tom Wolfe, and Robert Hass. She is currently pursuing a career in occupational therapy. In her spare time, she enjoys reading, writing, drawing and wandering around in the woods.

Michael Stewart is a writer and library professional who originally hails from western Pennsylvania. He received his undergraduate degree from Millersville University in 2015, where he worked closely with the university’s creative writing group and literary magazine, and is currently completing a master’s program in library and information science. By day, he works as a cataloger for a network of public libraries. Michael lives in Lancaster, PA with his boyfriend and their cat, Mona.

Christian Stock is a writer who has been involved in some form of literary performance, publication, or project within Lancaster for the last five years. His role at The Triangle involves all forms of guerrilla advertising, writing about poetry and events, and spreading good vibes. Look out for Triangle stickers and or stop him at various poetry readings throughout Lancaster. He also is the writer/editor for the futbol popular blog, Soccercorner Talk.

Sam Sweigert is a lover of lit and is lucky enough to call many a storyteller friend.  She holds a Bachelor’s Degree in English Education, and she is passionate about working in ways to promote community building through story, voice, and poetry.  She has had work published in Third Point Press and is currently the blog writer/curator for Lancaster Transplant,  a local organization focused on placemaking for new people in a new place.  When she’s not thinking about how cool the moon is, she’s trying to figure out how to navigate homeownership and will let you know when she has acquired a dog in her life because writers need pets. 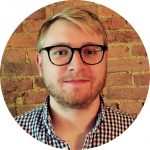 Eliot White is currently completing a Master’s Degree in American Literature at Millersville University. Before grad school, he taught high school English and social studies. A writer of both poetry and fiction, he has worked on the staff of Third Point Press, an independent online literary journal, and is the host of The Turning Wheel, a monthly reading series showcasing local and regional writers at DogStar Books. To pay the bills, he works as a writer and communication strategist for The Infantree.