The landscape of the coming-of-age novel is a complex and historically rich one. A centuries-long discussion has unfolded around the narrative strength of a seemingly simple concept: a child crossing (or being carried over) the threshold into adulthood. How does a form so old and so worn remain fresh and new in the 21st century? Sarah D’Stair’s Central Valley (Kuboa, 2017) provides an intriguing, mesmerizing answer to this question.

At its heart, Central Valley can be read simply as a coming-of-age story about a woman’s experiences during childhood. To reduce it to such a simple statement, however, seems insulting. The work is like a mosaic, a non-linear jigsaw puzzle of memories that have been sewn together to give the reader a glimpse into the narrator’s life. D’Stair’s novel is written in a stream of consciousness; no matter how disparate the thoughts may initially seem between one piece and the next, the reader is nonetheless swept into the swirling stream of the narrative. On this front, D’Stair’s novel is noteworthy for two reasons. 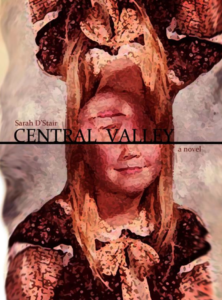 First, the nonlinear structure of the narrative is true to the actual experience of memory; rarely do we think about our childhood experiences, especially trauma, in a cut-and-dry fashion. Rather, we remember them in the way that D’Stair portrays them: sharp, distinct, and seemingly disparate, but truly all interconnected by a single consciousness.

Second, the nonlinear nature of the narrative serves to help distance the novel from a trite aspect of the traditional coming-of-age novel: focus on a single point of childhood trauma. Because of the “natural” inclination of a narrative to reach a single climactic point, it may seem natural to follow that all coming-of-age stories should come to a head with a single dramatic moment or traumatic experience. The idea that childhood contains only a single trauma, or that the threshold between childhood and adulthood is so distinct that a push from a single trauma can cleanly cross that line, is completely absurd. D’Stair’s novel allows for the exploration of several traumas—abusers don’t disappear after a single offense, after all—and the nonlinear nature of the narrative keeps us from assigning a disproportionately large value on a fixed point rather than spreading our attention equally across all given experiences.

The prose of the story itself is positively hypnotizing. D’Stair weaves a story in each chapter with strings of thought; where another author may reserve repetition for special cases, D’Stair is not shy about recycling her words tastefully. An excellent example of this can be found in the chapter titled “Mime (meemee)”, excerpted below:

Mime is a poem herself. A window poem a word of windows a window of words. She has very few words. She has a large window she looks out a long window days spent looking hands crossed before her hands soft that hold my face soft on my cheeks those same eyes now look at me out through the glass surface of my own eyes.

These repurposed words result in beautiful strings of observation that flow in a surprisingly natural manner. They braid themselves together in a way that seems reminiscent of the prose of Gertrude Stein. At its best, this prose is hypnotic; mesmerizing; captivating. All the while, the work continues to explore competently and in complex detail the past trauma and emotional development of the narrator.

If there is a problem with D’Stair’s project, it is in the fact that experimental works are always less accessible than their traditional counterparts. By no means is Central Valley casual beach reading or a waiting room distraction. It is a commitment by the reader to delve into an intricate, emotionally engaging, realistically complex portrait which neither pulls punches nor compromises itself for the sake of the reader’s ease. The payoff, however, seems well worth it. The fragmented and resewn journey of D’Stair’s novel is one that will leave any attentive reader transfixed and enthralled.

Central ValleyFictionKuboa PressNovelSarah D'Stair
Previous ArticleThe Strangeness of Our Fears: Carmen Maria Machado Discusses Her Debut Story Collection ‘Her Body and Other Parties’
Next ArticleReview: 'Not Without Our Laughter' by the Black Ladies Brunch Collective
Michael Stewart
Michael Stewart is a queer man from western Pennsylvania who currently resides in Lancaster. In 2015, he received his Bachelor of Arts in English (Linguistics) and German from Millersville University. There, he worked for four years on the editing staff of The George Street Carnival, MU's literary magazine. By day, he works as a cataloger for a network of public libraries, and he is currently in pursuit of a Master's Degree in Library Science.